My body has been through the mill, has had toxic substances pumped through it for basically forty- eight hours straight every three weeks for six cycles.  It worked, killing my cancer but my focus is now on building my body to a pristine condition. I want a body where cancer wouldn’t dare show its face around again or it would get demolished. I believe this all starts with what you put into your body. It takes little steps to divert away from Dominos fuelled diet to one that full of green goodness. For me the first steps were to fill my body with as much anti- oxidant power as possible. This began by drinking 1-2 cups of Japanese Matcha Green Tea daily, picked from the Camellia sinensis plant. Matcha Green Tea is a lot superior to normal green tea you pick up in the grocery shops as the leaves are far less processed, not heated and kept sheltered in order to preserve the nutritional content. When you drink the powdered Matcha leaf you consume the whole leaf as opposed to normal green teas where you brew and leave most of the leafy goodness behind. If you are looking to sweep up those free radicals caused by pollution, UV rays, radiation, and chemicals, which can lead to cell and DNA damage if produced in large quantities, then the highest grade Japanese Matcha Tea is your ticket.

There is little wonder as to why Match Green Tea has been part of Japanese culture for centuries as one cup of Matcha Green Teas has ten times the amount of nutrients as normal green tea, with vitamin C, selenium, chromium, zinc and magnesium among a few nutrients found. Speaking of anti-oxidants it is loaded with polyphenols such as flavonoids and catechins, which function as powerful free radical scavengers. More importantly it contains EGCg, Epigallocatechin Gallate. This catechin has been reported to be very biologically active, having a large role in cancer prevention. It has been found that Matcha Green Tea contains one hundred times more EGCg than any other tea found on the market. Personally I drink this tea just for this benefit but it has been shown to have numerous advantages such as containing L-Theanine which creates alpha waves in the body leading to a state of relax without drowsiness. Increased metabolism and fat loss are also among the benefits listed.

I don’t go a day without having a cup of green tea. It is quiet tasteless and is in no way undrinkable. You can add a half teaspoon of active Manuka Honey or slice of lemon to bring it to life. When making a cup, let the boiling water cool down a little as throwing half a teaspoon into very hot water  as it will destroy any of that anti-oxidant goodness. Only half a tea spoon of tea is necessary which means a tin will do you up to two/three months depending on how much you drink. It’s a little pricey but there’s no point in doing things in half measure as they say. You can buy it at any health store. Get her inta ya Synthia! 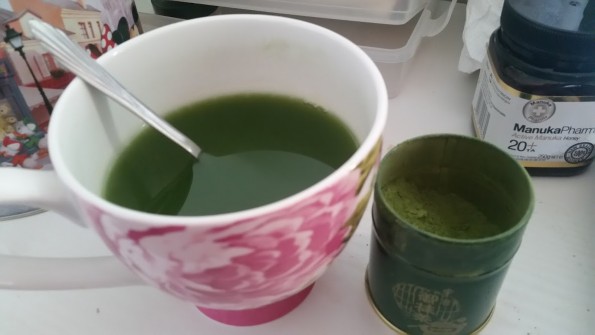